…continuing with Laurie and my exploration of Shiawassee County Michigan with my cousin Nathan and his better half, Janice.  This is part of Laurie and my late summer 2022 road trip. 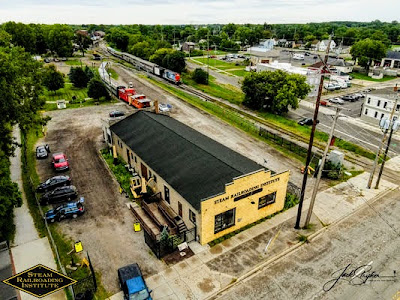 I didn’t have a good photo of the Steam Railroading Institute’s Welcome Center so I ‘borrowed’ this aerial view from the Institute’s website.  The Welcome Center is based in a freight warehouse which used to be serviced by the Ann Arbor Railroad.  The age of the building hasn’t been determined but another building rested on the current foundation toward the end of the 1800s.  The best guess as to the date this concrete block building was constructed is sometime in the 1920s.  During our visit, rolling stock filled the yard area...

As you’ll see in subsequent photos, the Steam Railroading Institute occupies quite a large site in Owosso...basically a large part of a former rail yard which included a roundhouse and a turntable for use with the locomotives.  The goals of the Steam Railroading Institute include public education as relates to steam era railroad operations in Michigan and the Great Lakes Region.  Of course, this effort includes maintaining the skills and technology needed to maintain steam locomotives.  The best way to maintain those skills and to educate the public is to operate steam locomotive related equipment and by providing the public with the experience of steam locomotives in operation. 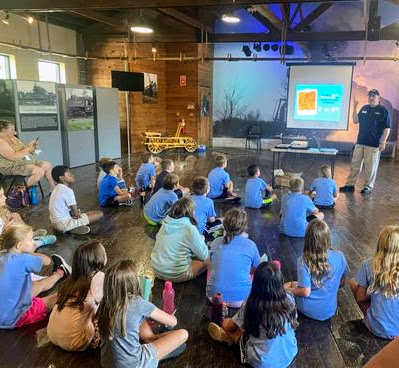 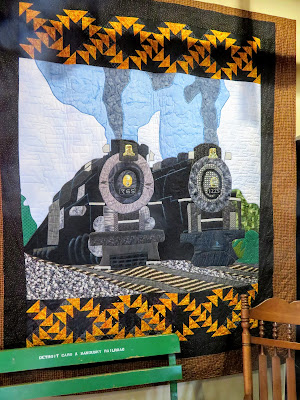 In addition to the information desk and a number of exhibits in the Steam Railroading Institute, there are quite a few exhibits, photos, etc., plus gift items and as you can see above, there is room for group or class presentations.  I love this quilt showing the Institutes locomotives!  At our home I have a large hooked rug that my mother made for me a long time ago depicting a steam locomotive crossing the prairie with bison and Native Americans included.

FYI, one of the most popular attractions at the Institute is the 7.5 inch Gauge Miniature Railroad off to one side of the railyard near the river.  These one-eighth scale trains began operations back in 2009.  Passengers welcome! 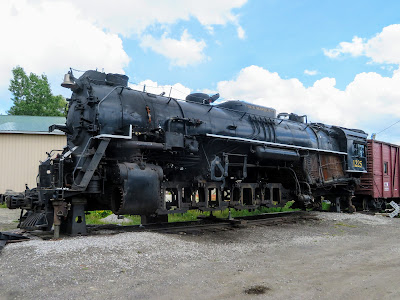 During our visit, both of the Institute’s steam locomotives were undergoing major overhauls.  Shown above it Pere Marquette steam locomotive #1225 up on blocks with the wheels missing…something I’d never seen before.  This locomotive is undergoing some of the most extensive mechanical work it’s experienced in over 70 years.

Locomotive #1225, a 2-8-4 ‘Berkshire’ type, was built in October of 1941 by the Lima Locomotive Works in Lima, Ohio.  This locomotive was used for 10 years, hauling freight for Michigan factories and farms…obviously including war materials during WWII.  This is one of 39 of the locomotives of this type that were built for the Pere Marquette Railway.  Eventually, this model of the ‘Berkshire’ steam locomotive was used by over a dozen railroads to haul freight and maximum speed and minimal cost. 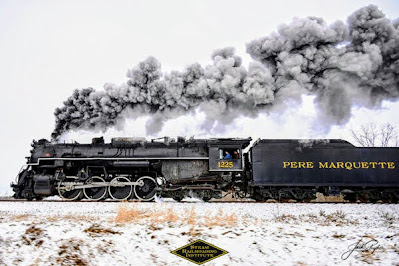 As you can see by the logo at the bottom of the photo above, which shows locomotive #1225, this is yet another photo I borrowed and am republishing for the ‘public good’.  That winter scene is why we moved to Eastern Tennessee and warmer weather.

The Pere Marquette steam locomotive is 101 feet long and with its tender, it weighs 401 tons.  It takes about 8 hours to generate a full head of steam in the boilers.  The tender holds 22 tons of coal and 22,000 gallons of water.  The engine gobbles up a ton of coal every 12 miles and it uses 150 gallons of water per mile.  In today’s dollars, the cost of the locomotive totaled $2,500,000.

Pere Marquette Locomotive #1225 continued in service until it was retired in 1951 and replaced by diesel locomotives.  In 1957 it was saved by a Dodge Motor’s Vice President who also served as a Michigan State University Trustee.  He viewed the locomotive as a real piece of machinery for engineering students to learn from… Eventually #1225 made its way back to Owosso and the former Ann Arbor Railroad’s steam back shop.  By 1985, it moved under its own power after 34 years in a static state.

Owned, maintained and operated by the Steam Railroading Institute, Pere Marquette #1225 is listed on the National Register of Historic Structures.  It also gained fame for its role in the 2004 Christmas movie classic, “The Polar Express”.  Its blueprints were used for the movie locomotive’s image and its sounds helped bring the animated train in the film to life. 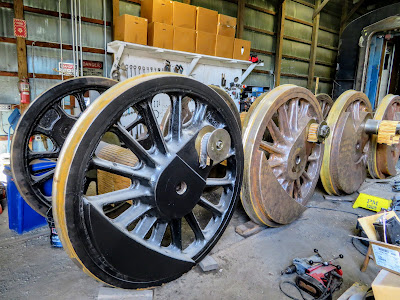 These are the ‘missing’ wheels…including the drive wheels…for Pere Marquette Steam locomotive #1225.  They are huge.  Our guide told us that they had just come back from being reconditioned at a facility in East Tennessee near Chattanooga.  Reconditioning these old steam locomotives is quite challenging as there are very few companies who are capable or equipped to complete the varied tasks. 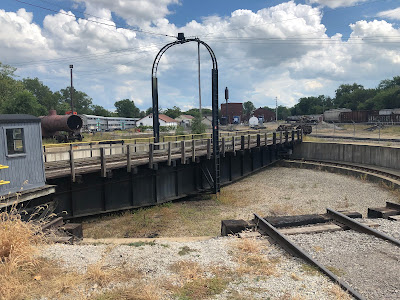 Railroad round tables were designed to ease the task of ‘parking’ locomotives in a repair shop or roundhouse.

The round table at the Steam Railroading Institute was built in 1919 with a 90-foot length.  It was installed for the Pere Marquette Railway at the engine/locomotive terminal in New Buffalo Michigan.  It served that 16-stall/workstation roundhouse until operations were ceased at that terminal in 1984.  The Steam Railroading Institute relocated it to Owosso and the Institute uses it to turn the equipment, provide service to the back shop…and of course to demonstrate its use for visitors.  When the Institute purchased the round table, they added 10 feet to its length, which made it easier to handle Pere Marquette Locomotive #1225 and other large pieces of rolling stock. 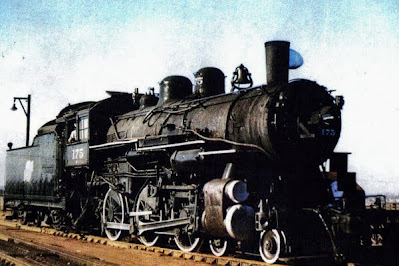 I also borrowed this photo from the Internet.  This is the second steam locomotive owned by the Steam Railroading Institute.  Chicago and Western #175 was built in 1908 by the American Locomotive Company.  Until the early 1950s, this locomotive hauled freight and passenger trains from rural Wisconsin to the iron-mining area in the Upper Peninsula of Michigan.  It is a 4-6-0 ten-wheeler, a late example of the standard dual-purpose locomotive of the early 1900s.

The Chicago and North Western Railroad and others ordered 395 locomotives similar to this one.  However, #175 is one of the 40 most modern of the group.  With its 63” driving wheels, this model locomotive was known to exceed speeds of 60 miles per hour.  #175 is the only Chicago and North Western locomotive in Michigan and it was the last steam locomotive to operate on that railroad before it was retired in 1957.  The Institute bought #175 from the Mineral Range Railroad in 2017 and it was moved to Owosso.

Just my luck… The Steam Railroading Institute is in the process of rebuilding the wheel and running gear of the Pere Marquette #1225, followed by a complete rebuild of the CNW #175.  The Institute will finish restoring #175 following the return of #1225’s return to service.  Donations are needed for both projects!  Check out the needs at https://michigansteamtrain.charityproud.org/Donate. 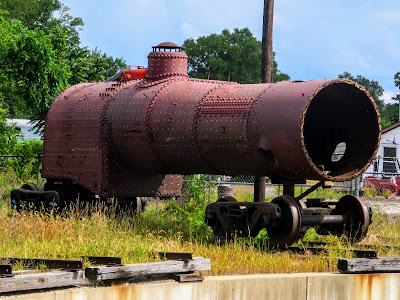 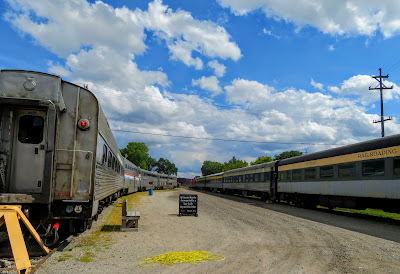 In addition to the 2 steam locomotives, the Stream Railroading Institute possesses a plethora of other equipment and parts/pieces of equipment.  To me it looks like the first photo above is of a steam locomotive’s firebox and boiler area.  In any case, it is eye-catching…

Rolling stock includes a General Electric 25-ton Switcher used for moving Pere Marquette #1225 around the facility as needed.  It’s much simpler to use the diesel powered switcher than firing up the boilers to relocate that big locomotive somewhere else in the railyard. 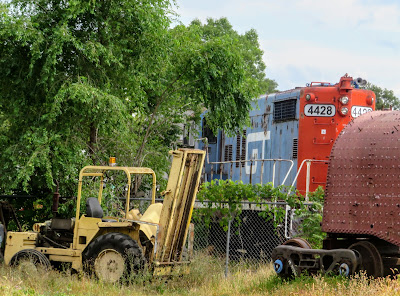 As Nathan and I wandered around the rail yard and rolling stock service and repair area, I noted this Grand Trunk Railroad Electro-motive GP-9 Diesel locomotive hiding in the background.  This unit was built in 1954 and it was among the first dozen diesel locomotives ordered by the Grand Trunk.  Originally number as GTW 1752, in 1956 it was re-numbered as #4428.  It was retired in 1992.  Since retirement from GTW, #4428 has had a number of owners.  I don’t know if the Steam Railroading Institute owns #4428, but I did find a photo of this particular diesel locomotive pulling the Institute’s ‘North Pole Express’ Christmas train and they will be using a Diesel locomotive during this holiday season.

The Steam Railroading Institute is located at 405 South Washington Street in Owosso Michigan.  Phone: 989-725-9464.  Check out their website at https://michigansteamtrain.com/.

Thanks for stopping by and for following us on our late summer roadtrip!