As we cruised the back roads of South Carolina on our way back from Charleston, we came up the west side of the state, driving through what is sometimes referred to as the ‘Old Ninety-Six”.  I came up with the route by reading about the area in 2 of National Geographic’s books, “Guide to Scenic Highways and Byways” and “America’s Hidden Corners”.  The term, “Old Ninety-Six”, comes from the name of a strategic fork in the Cherokee path that was located 96 miles south of the Cherokee capital of Keowee. 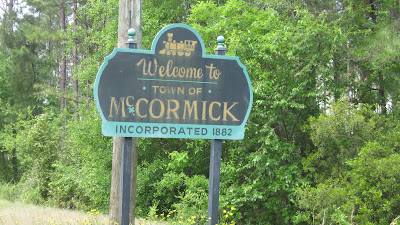 There are several towns in the “Old Ninety-Six” area of the state… These include Abbeville, Edgefield, Due West, McCormick and yes, Old Ninety Six.  We focused on the town of McCormick primarily because it’s one of Laurie’s family names.
The town of McCormick was actually named after Cyrus Hall McCormick, the inventor and industrialist who invented, manufactured and marketed the first mechanical reaper.  The town’s general layout was developed by McCormick’s wife, Nettie.  She even named many of the streets.  Fire destroyed most of the main part of town in 1884.  Also in 1884, the McCormick Academy was built as a contribution to the town.  Cyrus never visited this town that was named after him but Nettie maintained an interest in McCormick for many years after his death. 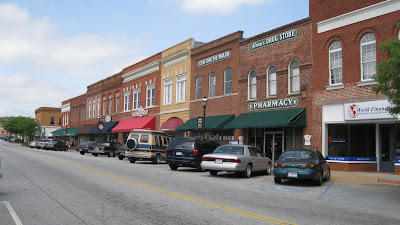 This is a view of Main Street in McCormick.  Fires destroyed parts of the old downtown during the 20th century and from what I’ve read, about 2 blocks in the business district have been lost.  One stop that might prove satisfying is Stern’s Drug Store, which features a turn-of -the century soda fountain.
The town is built on land previously owned by William B. Dorn who discovered gold here back in 1852.  Mr. Dorn had purchased the land from Dr. John Wardlaw Hearst…yes indeed, a relative of the Hearst family.  Cyrus Hall McCormick subsequently bought the land from Dorn.  Cyrus couldn’t make much of a profit on mining so he donated 40 acres of land for a town to be built.   Then he pushed the Augusta and Knoxville Railroad as well as the Savannah Valley Railroad to intersect their tracks at “his” new town.  He owned considerable stock in both railroads…
The town was one of the first planned towns in the USA.  McCormick was incorporated as a ‘dry’ town and it remained alcohol free for over 100 years.  The town also has the distinction of being the only one built over a gold mine.  Incidentally, mine tours are available as is the opportunity to pan for gold.  The mine operated until the 1930’s.  For more information, go to www.heritagegoldmine.com or call the visitor’s center at 864-852-2835. 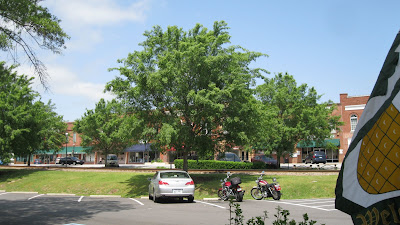 McCormick is a very relaxing and laid back little town.  This is a view across the railroad tracks that run right though the center of town.
The Dorn family had some staying power.  Following their success with the gold mine, the family built the Dorn Mill and Gin in 1898.  Milling continued until the 1940’s and the cotton gin operated into the 1050’s.  The family also owned a local lumber yard.  The 2 and ½ story mill still stands, with the original steam engines and equipment in place.  For more on this historic property, including some definitive photos, go to http://www.nationalregister.sc.gov/mccormick/S10817733003/index.htm. 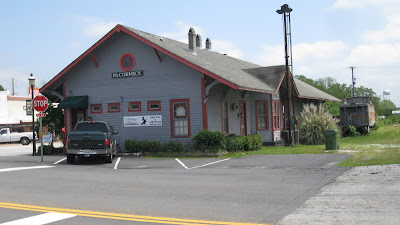 This is the old railroad depot at one end of Main Street.  It was built by the Charleston and Western Railway in 1910 to replace an earlier station that had burned down.   It’s been restored and maintained and it’s now being occupied by a retail operation named “Hobo Consignments”.   In its heyday, 8 trains stopped in McCormick per day… For more information check my Blog on 5/18/11 entitled “South Carolina – Railroad Depots along the Way (#2)”. 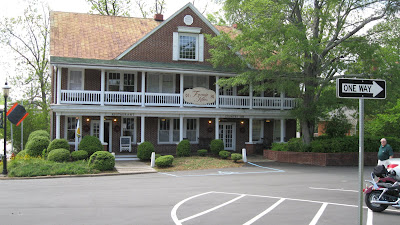 This is Fannie Kate’s Country Inn.  It’s right across the tracks from ‘downtown’ McCormick.  Fannie Kate’s operated as an Inn and Restaurant from 1882, beginning with the coming of the railroad, until 1974.  It was reopened in 1995.   For more information on Kate’s, go to my Blog from 5/6/11 entitled “Great Burger!! (McCormick SC)” or go to www.fanniekates.com.  One other thing about the Inn…it is reputed to be haunted!
Another attraction in McCormick is the J.J. Dorn house.  It was built in 1917 and is currently owned by the town of McCormick.  It’s on the National Register of Historic Places.  The first floor museum depicts the life-style of wealthy Southerners at the turn of the century.  This was the home of Joseph Jennings Dorn, a former Senator from South Carolina.  Unfortunately, we didn’t take a photo of the Dorn home…more at the end of this blog... 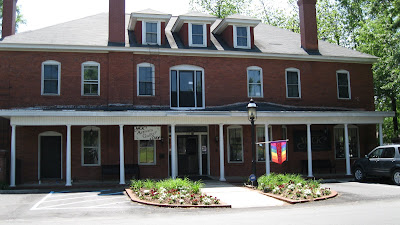 This is the former Hotel Keturah, the third hotel in town built to handle all of the travelers passing through on the railroads.  The original hotel was built in 1883 by William J. and Mary Keturah Connor.  It burned down in 1910 and the building pictured above replaced the original hotel.  This building now houses the McCormick Arts Council at the Keturah (MACK)
Note: The McCormick Arts Center displays many high quality pieces of art and craft items for sale. (Laurie picked up a little Anniversary gift for herself!) For more on the McCormick Arts Center, as well as 2 nice photos of the building, check it out at http://www.the-mack.org/.
McCormick South Carolina is fairly well isolated from big city influences.  It's 40 miles...over an hour north of Augusta GA on US 221 or; 53 miles south of Anderson on SC Rte. 28 or; 77 miles west of Columbia on US 378.

You do get the feeling that you are visiting a little bit of a time warp… I did read one piece on McCormick which equates that feeling to a negative time in history.  In any case, Laurie and I liked her little ‘namesake’ town!  For more information on McCormick and it’s attractions, including a nice photo of the J.J Dorn house, go to http://mccormickscchamber.org/attractions.php?silverheader=2.