Before I complete the last post pertaining to our trip to North Georgia and Southwestern North Carolina...and before I begin our chronicles related to our most recent road trip, I've paused to catch up on a few local bits and pieces.  Of course, as usual, food is heavily featured! 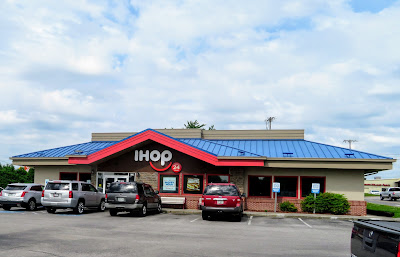 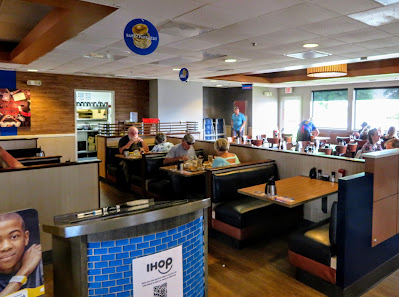 I didn’t imply that the food that I was featuring would be gourmet in variety… Laurie and I hadn’t eaten at an “IHOP”, formerly named “International House of Pancakes”, since the late 1970’s when we frequented a location in Clayton Missouri.

We were out and about and on impulse we decided to stop and have a late breakfast.  The restaurant was fairly busy. 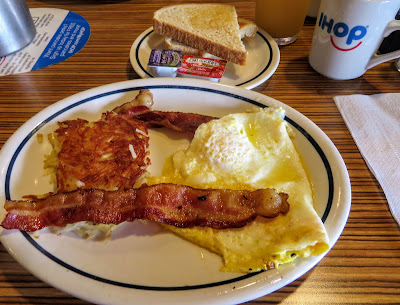 We stuck to the basics.  Laurie ordered 2 over-easy eggs, hash brown potatoes, bacon and toast. ($9.49) The “Quick 2-egg Breakfast” was just the right size for her appetite.  Not too many potatoes and only a single slice of toast…although I’m pretty sure she would have liked a third piece of bacon. 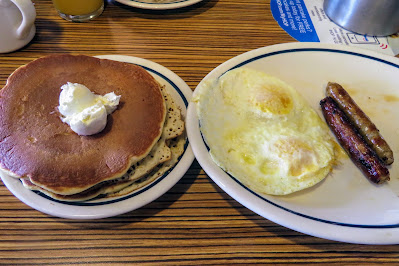 I was craving pancakes.  We almost never make them at home as Laurie just doesn’t like them.  It’s a texture thing for her.  So, I ordered IHOP’s “2x2x2”, 2 pancakes, 2 sausage links and 2 easy over eggs. ($8.69) The pancakes were just OK as they tended to separate as I ate them…and they should have held up.

Service was slow, probably because they were short staffed in the kitchen.  Our waitress was OK but she could have been a little more attentive re: coffee refills.  The IHOP in Maryville Tennessee is located at 906 Turner Street.  Phone: 865-981-9677.  Website: https://restaurants.ihop.com/en-us/tn/maryville/breakfast-906-turner-st-4412. 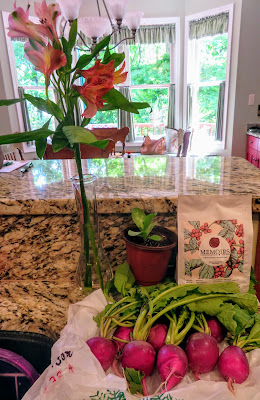 One recent morning we stopped at the smallish farmer’s market that is held/staged in a shopping area near the center of Tellico Village in Loudon Tennessee.  With the exception of the orchids from my endodontist’s office, we did pick up a few items.  They included 2 nice bunches of radishes, a bag of locally ground coffee and a new plant for Laurie’s deck top garden.  The plant is a blue honeywort.   These plants originated in the Mediterranean and have been known since ancient times…with one reference book describing the plant that was published in 1597.

The weekly Tellico Village Farmer’s Market is held on Wednesdays between 9 AM and Noon at 202 Chota Center, just off TN Hwy 444 in Loudon Tennessee. 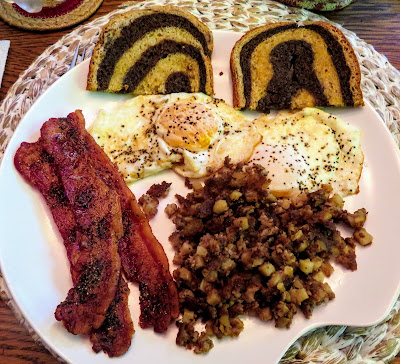 Every once in a while, we love having breakfast for dinner.  In this case, I fried up some roast beef hash (from a can with my added spices), bacon, 2 over-easy eggs and a slice of buttered toast.  Truly a satisfying dinner! 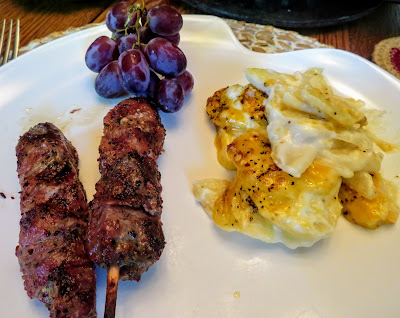 As we’ve gotten older and are generally eating less, our home cooking adventures do tend to stray toward the prepared or semi prepared food items.  Hassle and clean-up are both simplified.  In this case, we picked up a package of ready to microwave cheesy scalloped potatoes and seasoned bacon wrapped chunks of beef on skewers.  I grilled the beef skewers and we finished our meal ‘presentation’ with some red seedless grapes. 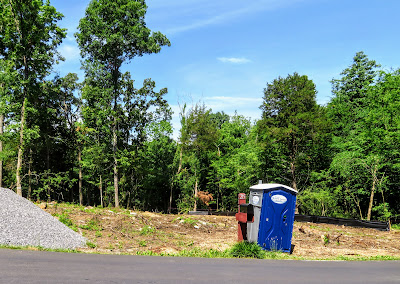 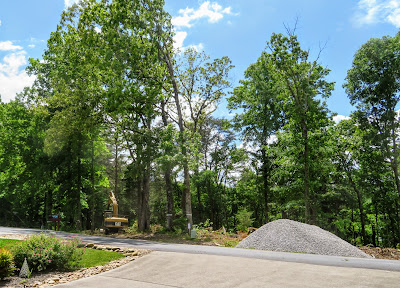 As I’ve previously posted, two lots across the street from our home have been almost completely cleared in preparation for the construction of 2 new homes.  Hence the ‘charming view’ of a blue ‘porta-potty’ right next to our mail box…as well as the heavy equipment finishing preparation of the adjacent lot. 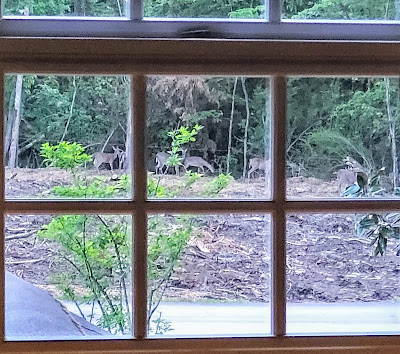 On two occasions, Laurie and I have spotted a large herd of deer working their way across the back fringe of the newly cleared lots.  We don’t know if they were grazing on new growth or if they were seeking newly available minerals that had been exposed as the properties were cleared.  At one point we counted 14 deer that we could see from our 2nd story windows. 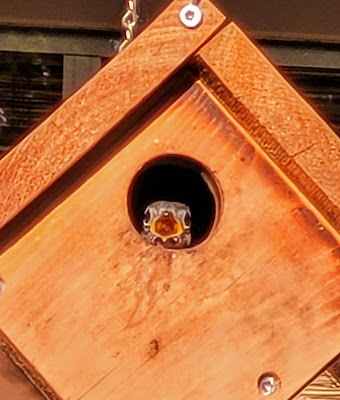 I thought that I’d end this post with this whimsical and very cute photo.  Laurie was out on the front porch checking on her plants when she looked up at the birdhouse hanging from the roof/beam over the railing.  And what did she see…a baby bird, about to fledge, just looking for something to eat!