On the last day of our short exploratory trip to North Georgia and Southwestern North Carolina, we were able to pick up a few more sights and one more dining experience.

From Sylva North Carolina we headed west on US Hwy 74 toward our route across the Smoky Mountains. 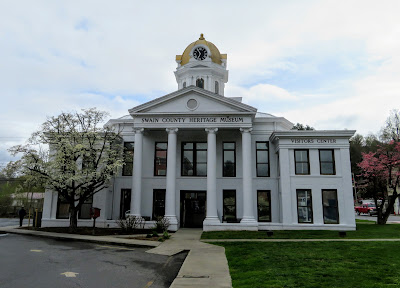 Our first stop was at Bryson City North Carolina.  We didn’t do any shopping at this stop as the group wanted to get back to our home in East Tennessee by the afternoon…no late evening arrivals!

Still, I did stop and take some photographs.  Bryson City is the county seat for Swain County…and this Classical Revival structure is the old courthouse.  When it was built in 1907, this handsome building became the third county courthouse in Swain County.  It’s been listed on the National Register of Historic Places since 1979.

As you can see from the photo, the structure is now the home of the Swain County Heritage Museum and Visitor’s Center.  This facility is open year around.  Phone: 828-488-7857.  Their website can be found at: https://www.swainheritagemuseum.com/.

Bryson City has a population of about 1,450 residents.  Located on the former lands of Cherokee Native Americans, the town was originally called Charleston.  It grew into an important railroad hub.  Today, its claim to fame is tourism, given its location near the Great Smoky Mountains National Park, Nantahala National Forest, the Nantahala River and Fontana Lake.  Bryson City is surrounded by mountains… 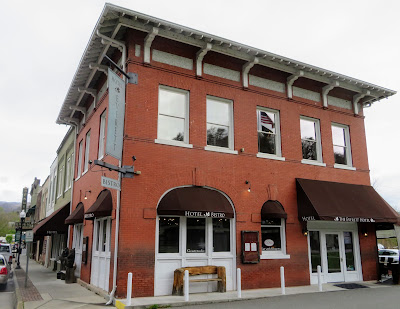 Another historic building in town is the Everett Hotel which is located at 16 Everett Street.  When it was built in 1905, it was the Bryson City Bank.  This luxury boutique hotel is centrally located in the middle of town…with the visitors center and museum just off to one side.

Today, the Everett Hotel features 10 luxury suites, a bar, upscale restaurant and a rooftop terrace.  Renovations were completed in the fall of 2015.   The building served as the bank until the mid-1960s.  For a time county government and the Chamber of Commerce offices occupied the space.

To learn more about the hotel and its restaurant, you can call 828-488-1976 or check out the hotel’s website at https://www.theeveretthotel.com/. 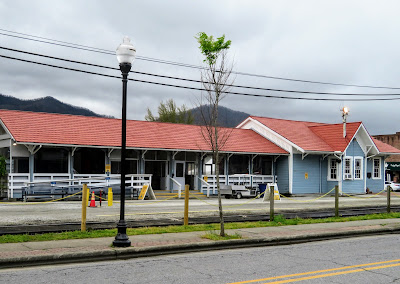 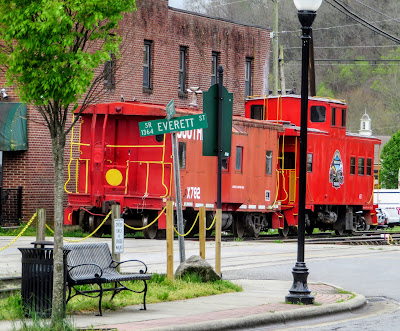 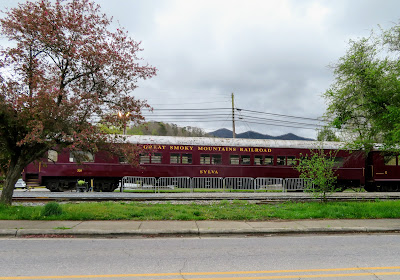 These photos in Bryson City feature a very important regional tourist attraction.  The Bryson City railway depot was originally built in the 1890’s.  It has been restored and expanded…and now it is home for the Great Smoky Mountains Railroad.  This popular railway experience features 53 miles of track, 2 tunnels and 25 bridges as passengers go on journey through a remote corner of North Carolina…Bryson City to Dillsboro North Carolina.  Of interest to railway buffs, GSMR also operates a short line freight service to two points that connect with other rail lines.

The Great Smoky Mountain Railroad, its rails and locomotives have been featured in 4 different movies.  They are “The Fugitive”, “My Fellow Americans”, “Digging to China” and, “Forces of Nature”.

The railroad also operates the Smoky Mountain Trains Museum, which is located adjacent to the Depot.  The museum features a collection of over 7,000 Lionel engines, cars and accessories as well as a large model train layout, a children’s area and a gift shop. 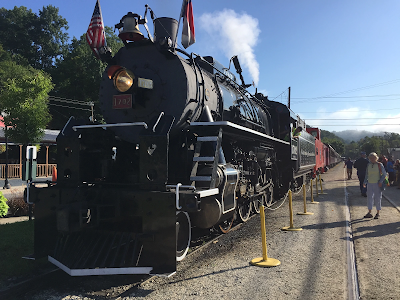 I ‘borrowed’ this photo from the Internet.  While the majority of the Great Smoky Mountains Railroad’s excursions are power by diesel locomotive, steam locomotive #1702 dates back to 1942 when it was built as part of the WWII war effort.  This large steam locomotive has been converted from coal to oil for fuel and it one of two in its class remaining in the USA.

The Great Smoky Mountain Railroad is owned and operated by American Heritage Railways, Inc.  That company also owns and operates the famous Durango and Silverton Narrow Gauge Railroad, as well as the 1883 Grand Imperial Hotel in Silverton Colorado.

Rail excursions on the Great Smoky Mountain Railroad range from 3 and a half hours to full day trips and special trains are also operated.  An example of the latter is the “Polar Express”.  Different classes of service are offered depending on the trip chosen.  The depot in Bryson City is located at 45 Mitchell Street.  Phone: 800-872-4681.  Website: https://www.gsmr.com/. 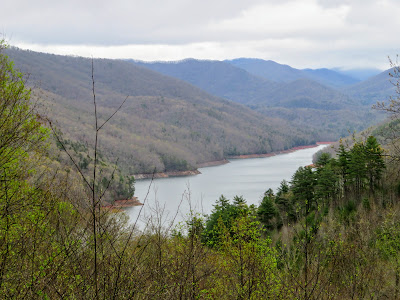 From Bryson City, we continued in a southwesterly direction along US Hwy 74 and then headed northwest into the Smoky Mountains along on NC Hwy 28.  We stopped to take in this view of Fontana Lake…actually a reservoir formed behind Fontana Dam on the Little Tennessee River.  This scenic 17 mile long lake is situated along part of the southern border of Great Smoky Mountains National Park.  At its maximum depth of 440 feet, it is the deepest lake in North Carolina.

Fontana Dam was completed in 1944.  It was constructed to produce electricity to power the ALCOA plants in nearby Alcoa Tennessee.  The plant was a key producer of aluminum in support of the American war efforts during WWII.  The lake is named after a Montvale Lumber Company logging town that was once located on the lake’s north shore.  The current village of Fontana Dam has a population of about 27 people and it serves the Fontana Village Resort, a popular summer destination.  The resort’s website is found at https://fontanavillage.com/. 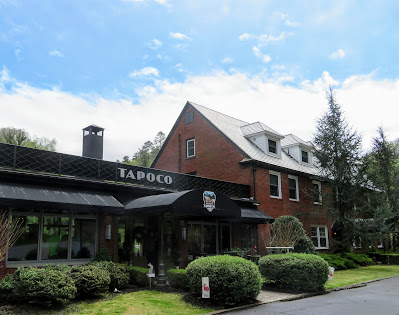 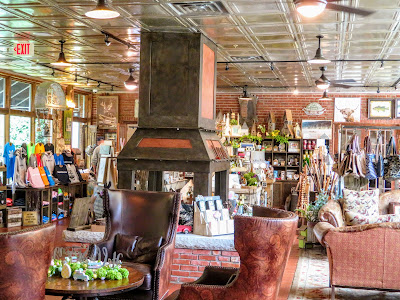 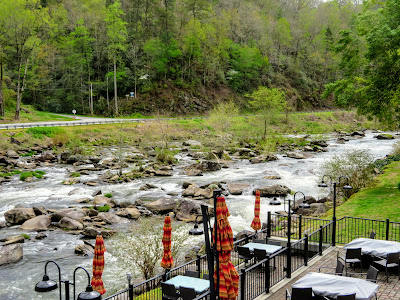 From Fontana Dam, we moved along NC Hwy 28 until it intersected with US Hwy 129, and it’s infamous segment called the “Dragon’s Tail”.  But instead of immediately weaving our way through the mountains to our eventual destination in East Tennessee, we turned back to the south along US Hwy 129 for a couple of miles.

Hey…it was time for lunch!  So we stopped at yet another site that was originally built to support dam construction…that has since morphed into a resort.  Tapoco Lodge and Tavern pre-dates Fontana and Fontana Dam.  This lodge was built in 1930, and like Fontana Dam, it was built by the Aluminum Company of America for its hydroelectricity.  The name Tapoco comes from the first two letters of each word for the Tallassee Power Company…which started construction of the nearby Cheoah Dam in 1916. 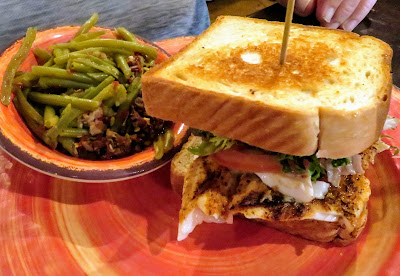 Laurie’s sister Bonnie and Bonnie’s husband Bill had dined here once before and Laurie and I have eaten here on several occasions.  Unfortunately, it was too chilly on this April day in the mountains to dine on the patio.  The fact that the inside dining area for the Tapoco Tavern isn’t a great space is amplified by the fact that I didn’t take any photos of it…

On to the food… Always a fan of fish or seafood of any type, Bill ordered the “Riverside Trout Sandwich”, blackened Carolina Mountain trout with lettuce, tomato and tartar sauce. ($17.00) For his side, he selected the Southern style green beans.  He did enjoy his sandwich… 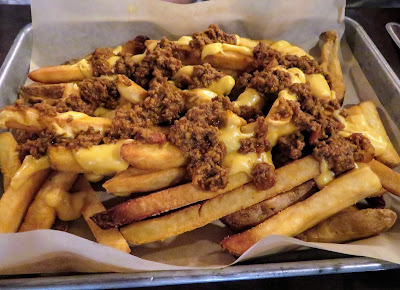 Our group also shared this order of “Chilhowee Cheese Fries”…thick cut fries loaded with chili, cheddar cheese and green onions. ($14.00) It was OK but it could have used a bit more chili and a little more cheese… 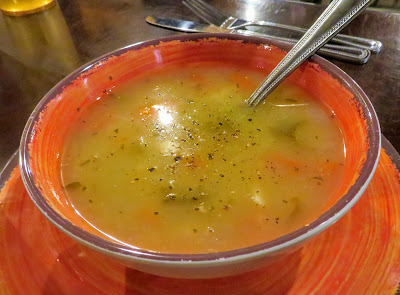 Both Laurie and Bonnie decided that given the big order of chili cheese fries, that they would each just order the soup of the day. ($6.00) They were happy with their choice, in this case a chicken and vegetable broth creation. 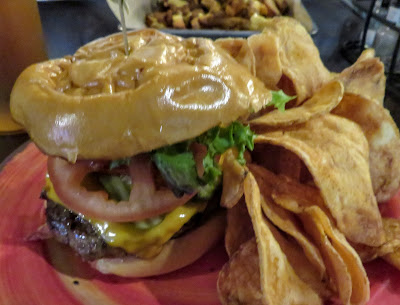 As for my lunch, sorry about the horrid photo… I ordered the “Tavern Burger”, an 8 oz. premium Black Angus beef patty with a toasted buttered brioche bun topped with lettuce, tomato, pickles and cheddar cheese. ($15.00) For my side I chose the Tapoco Chips.  The burger was overcooked and my meal was just OK. 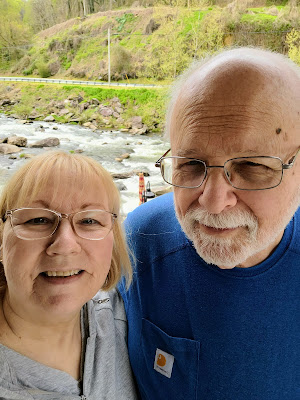 Just who in the H___ is that old guy with Laurie?  After lunch we all wandered out on the patio for a better look at the Cheoah River…and Laurie took this ‘selfie’ of us.  The older I get, the more I don’t like having my picture taken.

Following lunch we headed back along the “Dragon’s Tail” aka US Hwy 129 and made it safely across the mountains to East Tennessee and home.  It was unusual but we didn’t encounter very many motorcycles along the way…and this is hallowed ground for motorcycle devotees.