A Late Summer Road Trip to the ‘North Country’

Finally…a substantial road trip to an area we haven’t visited in many years.  We headed north to Michigan, my home state.  Plans included a lot of sightseeing, a number of museums and a couple of visits with family.  I tracked the mileage and from beginning to end we drove 2,316 miles.  Post trip, looking back on our itinerary, I should have allowed 2 additional days for this adventure.  It has been quite a bit of time since I’ve planned a longer road trip…that’s my excuse for my planning faux pas. 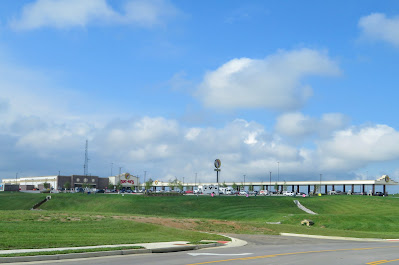 As we progressed north through Kentucky…along US Hwy I-75…I didn’t need gas yet but then I saw something we’d never seen before and we had to check it out.  It was a BUC-EE’S!

This is a relatively new location for a chain of gas stations and ‘convenience’ stores based in Texas.  BUC-EE’S had just recently opened their 50th location over in Crossville Tennessee but we hadn’t visited it yet.  At this point, the company has locations in Texas, Alabama, Georgia, Kentucky, Florida, South Carolina and Tennessee.

As you can see, even from a distance, these stores are very large and the gas pumps go on ‘forever’!  Interestingly, commercial trucks and truckers aren’t welcome at BUC-EE’S.  Reportedly, other locations are under development in Colorado, Kentucky, Mississippi and Tennessee. 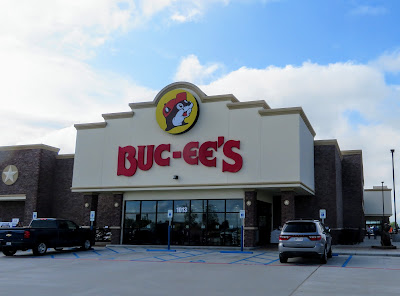 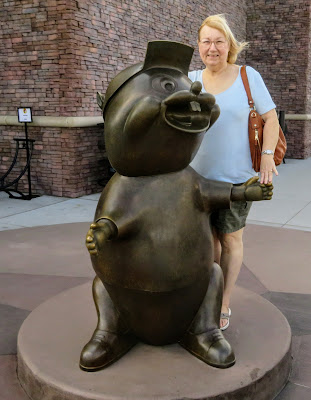 I talked Laurie into posing with BUC-EE, a 5’ tall sculpture of the company’s mascot, in front of the store.  The company was founded by Arch “Beaver” Aplin back in 1982.  Where did the name BUC-EE come from?  “Beaver” Alpin formed the name by combining his childhood nickname with the name of his Labrador retriever “Buck” plus the appeal of the old Ipana Toothpaste’s animated mascot, Bucky the beaver. 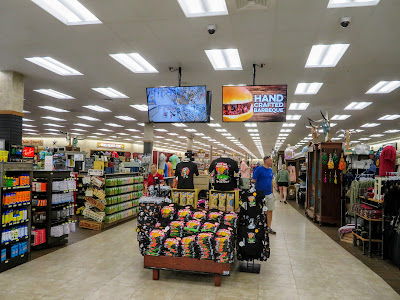 BUC-EE’S is not your typical travel center!  These ‘convenience stores’ are huge…basically the size of many discount stores across the country.  At 68,000 square feet, the company’s location in New Braunfels is the largest convenience store in the world.  It features 120 fueling locations, 1,000 parking spots, 64 ice freezers, 83 toilets, 31 cash registers, 4 “Icee” machines and 80 fountain dispensers.

FYI, the restrooms at BUC-EE’S are exceptional.  Not only are there lots of them but the stalls are truly private from floor to ceiling and there is a crew on duty that continuously cleans and patrols them looking for issues or needs. 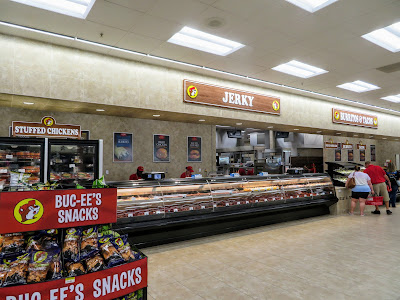 Laurie and I do like beef jerky… Well, BUC-EE’S has a jerky bar that offers about 37 varieties of this popular snack food!  Did you know that the dried meat/snack business in the USA realizes $2.8 billion a year in sales?  We did buy a package of nice peppered beef jerky. 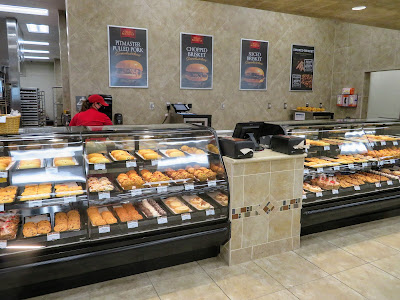 Not in the mood for jerky?  How about a plethora of baked goods?!  Sweet and savory abound in these display cases.  Haven’t had a kolache in a long time?  You can get them at BUC-EE’S… 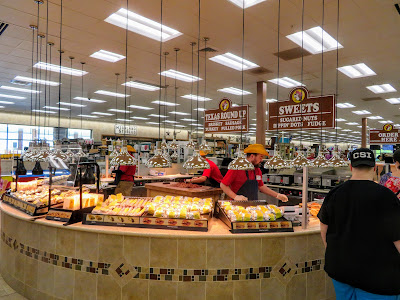 Then there is the Texas Round Up counter with brisket, pulled pork, turkey and much more!  Sausage on a stick, fish tacos, pastrami Ruben, Texas cheesesteak burrito, Texas hot dog/smothered with a Frito Pie, club sandwiches, a mammoth chicken fajita Taco…the options go on and on.  BUC-EE’S also offers breakfast tacos, spicy saltines (great with cheese), a variety of sausages and, of course cheese.  I won’t even try to list the sweets one can pick up at BUC-EE’S, but the fudge is highly rated by visitors and the ‘Beaver Nuggets’ are allegedly addictive.  Looking for something healthier?  They even offer dried fruits and vegetables… 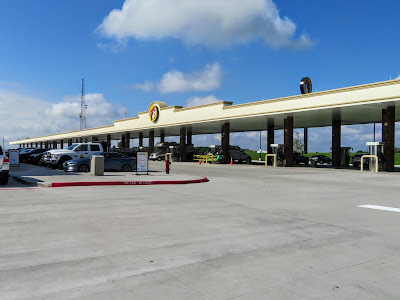 Customers shouldn’t have to wait too long to fuel up at any BUC-EE’S location.  The number of fueling positions ranges from 80 to 120.  We filled up but I didn't count the number of fueling stations.  Some locations offer Ethanol Free and DEF fuels.  FYI, DEF stands for Diesel Exhaust Fluid… Yes, Electric Vehicle Charging Stations, even super-charging stations are installed or being installed at many BUC-EE’S locations.

FYI…the World’s Largest Car Wash is located at BUC-EE’S in Katy Texas.  It is 225 feet long!

The Richmond Kentucky BUC-EE’S Store along Interstate 75 opened in April of 2022.  To learn more about BUC-EE’S, you can just go to https://buc-ees.com/.  The Internet is loaded with food reviews and commentaries all related to the growing chain of huge travel service centers.  One other item of interest, you can order some of BUC-EE'S most popular snacks and other goodies on-line!

Now on to Michigan! 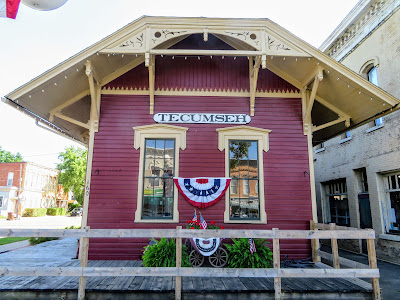 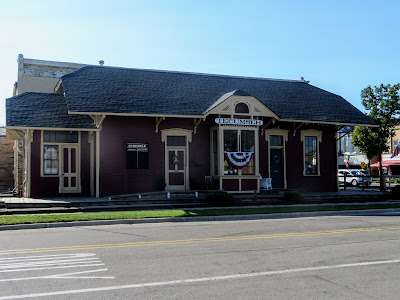 We headed toward my hometown of Jackson Michigan via MI Hwy 50.  Along the way, we passed through Tecumseh.  I last reported on this old depot back in 2010 and I was glad to see that it has been well taken care of over the past 12 years.  The depot was originally located at ‘Tecumseh Junction’, just south of downtown Tecumseh.  It was the crossing of the north-south Lake Shore and Michigan Southern Jackson branch and the west-east Detroit, Toledo and Milwaukee Railroad.  The latter railroad’s trackage was also used by the Detroit, Toledo and Ironton Railroad.

This pretty little depot was built in 1895 and it’s a reminder of Tecumseh’s railroad heyday.  Originally there were 2 depots in town… This depot was closed to passenger and freight traffic by 1930 and changed hands a few times before being moved to its current location on MI Hwy M-50 near the center of town. 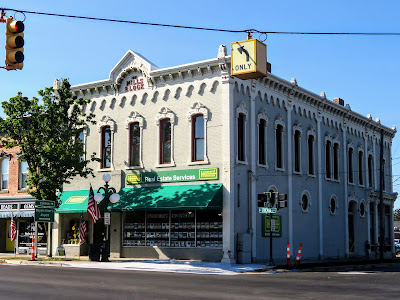 I couldn’t find any specific information on this handsome commercial building…other than the name of the ‘block’/building and the date it was built…this being the ‘Mills Block’ that was built in 1891.  A two block long commercial historic district, comprised primarily of Italianate style buildings, is listed the National Register of Historic Places but for some reason the detailed application isn’t available on-line via the National Register’s website.  A residential historic district has also been established in Tecumseh.

Today, Tecumseh has a population of about 8,680 residents and it is a pretty town...  The first settlement here was made in May of 1824.  The settlers, 15 men, 11 women and 6 children, all came from Jefferson County New York.  By 1824, Tecumseh had been designated as the Lenawee County Seat.  The city was named after the Shawnee Chief Tecumseh.

Tecumseh (ca. 1768 – 1813) was a chief and warrior who pressed for resistance to American expansion into Native American lands.  A gifted orator, he traveled among the various tribes and was able to form a Native American Confederacy…promoting intertribal unity.  Even though he sided with the British in the War of 1812 in order to stop the westward flow of pioneers, he became an iconic folk hero in Indigenous, Canadian and American popular history.  To learn more about this great leader, you can go to: https://en.wikipedia.org/wiki/Tecumseh.