…continuing with our exploration of Jackson Michigan and the surrounding area.  My memories were nicely tweaked during our visit plus, with the one exception noted at the end of this post, we was pleased with most of the changes we saw. 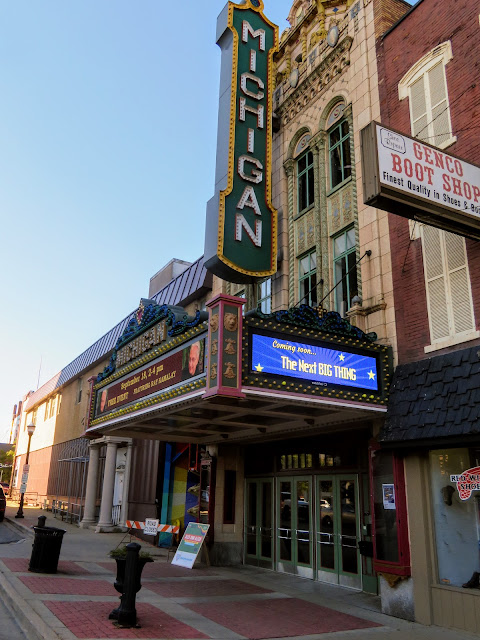 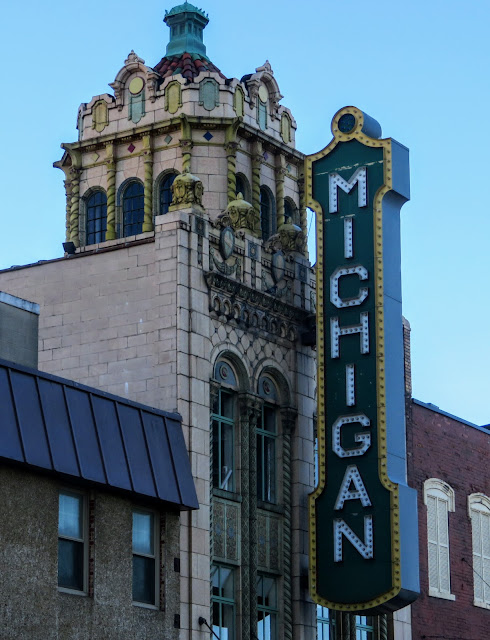 The Michigan Theatre, which is located at 124 North Mechanic Street in Jackson, first opened in 1930.  It was the last and largest theater build in the downtown area.  Listed on the National Register of Historic Places, it was part of Col. W.S. Butterfield’s theater chain.  Butterfield Theaters continued to operate the theater until 1978.

I saw a number of movies here back in the early and mid-1950s.  I most vividly remember standing in line with my brother Bobby waiting to see “Davy Crockett: King of the Wild Frontier” starring Fess Parker.  I was 13 years old and Bobby/Robert was 7.  This Walt Disney production was very popular despite the fact that it was an edited and recut compilation of the first 3 episodes of the Davy Crockett television miniseries.

I was delighted to see that this ornate and plush theater has been saved.  It is used to present special showings of movies and it serves as a popular venue for live entertainment.  Check it out at https://michigantheatre.org/. 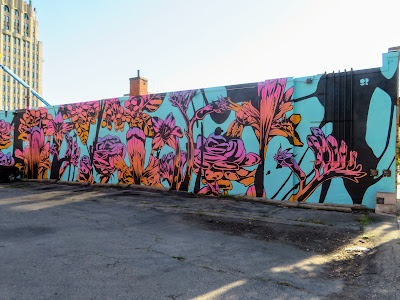 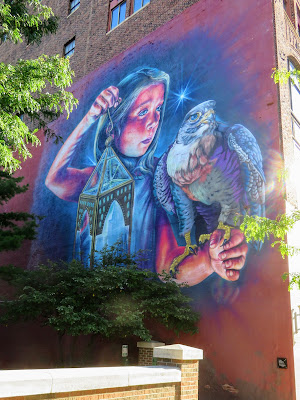 Here are a couple additional murals that were part of the “Bright Walls Festival” in downtown Jackson.  There were 70 of these creative murals across the center of town.  Unfortunately, I learned that this was the 4th and last scheduled festival of this type so while the murals will be around for a while, the party is over.  Too bad as all of this creativity not only brightened up Jackson…but it also provided a ‘feel good’ atmosphere. 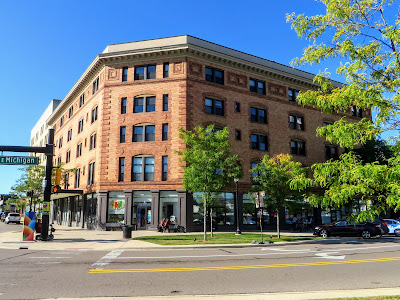 I remember this building as the Otsego Hotel.  I recall that my stepfather lived here for a short time after he came to Jackson.  The hotel opened in early 1904 and it was named after the manager’s birthplace near Otsego Lake, New York.  The hotel was renovated in 1918 and expanded to add more rooms in 1929.  The hotel operated until 1962 when it closed its doors.  In 1972, the building was sold to New Tribes Mission, who converted it to a school for missionaries.  This group moved out in the late 1970s.  The building was converted to federally subsidized housing in 1981 and today, as the Otsego Apartments, it houses senior citizens.  It is listed on the National Register of Historic Places. 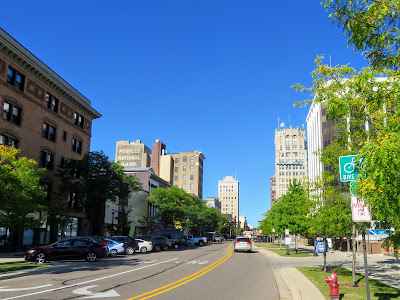 This view looking west down Michigan Avenue toward the center of Jackson is actually quite pleasant if not exactly the way I remember it.  Back when I was a teenager, occasionally ‘dragging the Ave” with a plethora of other like-minded young folks, it was 2 lanes in either direction.  Traffic was heavy and downtown was bustling.  At some point the City routed traffic around downtown on one-way streets and they turned this area into a pedestrian mall supported by a number of vacant lots turned into parking lots.  At least now, downtown seems more vibrant than in recent years...and it is attractive as well. 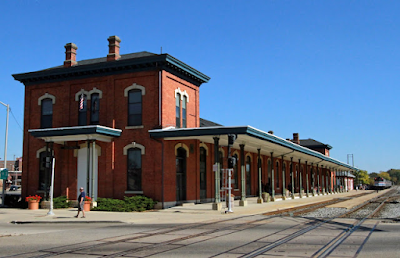 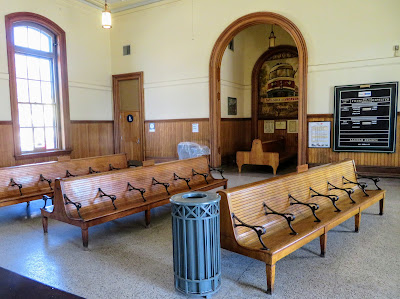 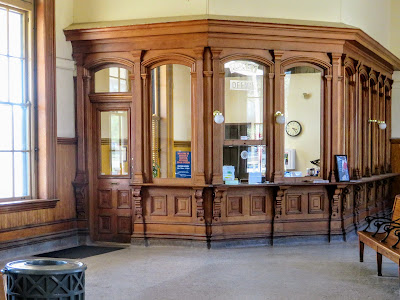 I’ve written about Jackson’s railway depot before.  I think that it is one of the most striking…most iconic railway depots anywhere in the USA.  It has be in operation since September 1, 1873, and it is the oldest continually operating passenger rail station in the entire USA.  The station currently services the Amtrak “Wolverine” line which runs from Detroit to Chicago.  When we lived in the Chicago area, Laurie and I have traveled through this station.  Don't you just love that original ticket office woodwork!

With several rail lines running through Jackson back in the day…and a nearby round table/repair shop complex, the depot was called the Jackson “Union Station” as it was a shared depot.  Four Presidents or candidates for President arrived in Jackson via this depot.  They include McKinley (1899), Taft (1910), Eisenhower (1952), and Kennedy. (1960) 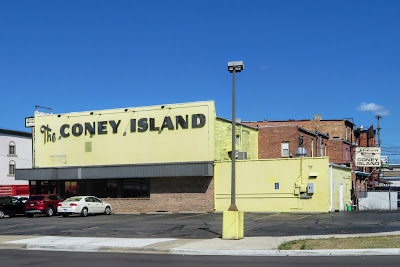 Coney Island hot dogs are a big thing in Michigan.  Reportedly, George Todoroff, a Macedonian immigrant, founded Jackson Coney Island in 1914.  Back in the day, the restaurant served ‘Coney Dogs’, with the Jackson version using a topping of either ground beef or ground beef heart, onions and spices.

The Todoroff family still operates restaurants in the area and they also produce a topping that they sell to other restaurants.  Virginia Coney Island, sign at the right rear of the photo, has also been a long term survivor…although neither restaurant is located as close to the railway depot as in the past.  Todoroff’s Coney Island Restaurant was open 365 days a year and 24 hours a day, catering to workers and travelers alike.  In a 2019 USA Today reader poll, the Virginia Coney Island was named as the best place for a Coney dog in Michigan. 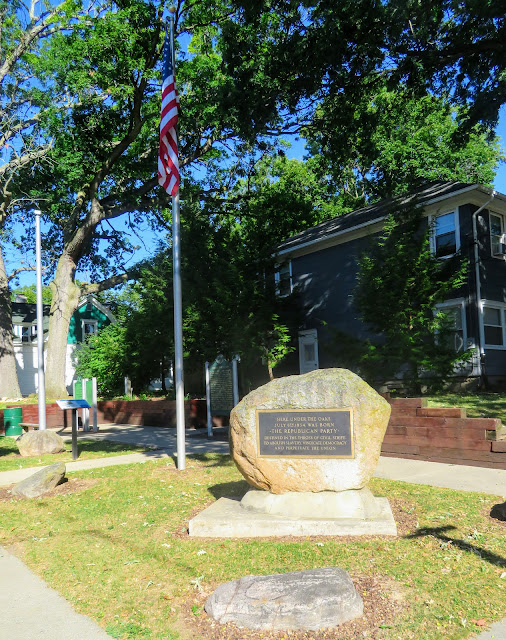 This memorial at the corner of Second and Franklin Streets in Jackson, marks one of the birthplaces of the Republican Party.  The first official meeting of the group that called itself “Republican” was held here “under the oaks” on July 6, 1854.  The plaques and markers commemorate an anti-slavery convention that was held that day.  Meeting outside to avoid a hot, over crowded hall, the group selected a slate of candidates for state elections.  In 1854, an oak grove was located here on “Morgan’s Forty” then on the outskirts of Jackson.  The other notable city credited as being a key birthplace of the Republican Party is Ripon Wisconsin. 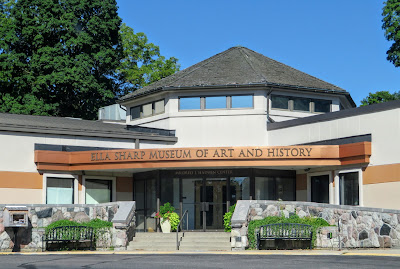 The Ella Sharp Museum is located in Ella Sharp Park in Jackson.  In 1891, Ella Merriman married John C. Sharp, a lawyer who had served at the Jackson City Attorney.  Ella was living on her family’s farm on the outskirts of Jackson and, after her marriage, her parents turned the farm over to the couple so they could move into town.  John stopped practicing law and under his and Ella’s management, this prosperous farm improved even more.  John died in 1908 and Ella continued to manage the property until she died in 1912.  Ella bequeathed the farm and her home to the city of Jackson to be used as a museum and park.

Ella Sharp Park was opened in 1916.  However, the museum didn’t open until 1965.  My mother was a frequent visitor to the museum and participated in the museum’s efforts to build their collection.  At one point my mother and Laurie spent a bit of time at the museum helping to identify patterns and styles of weavings and quilts in the facility’s collection.  The museum structure shown above has been built in the years since my mother lived in the Jackson area. 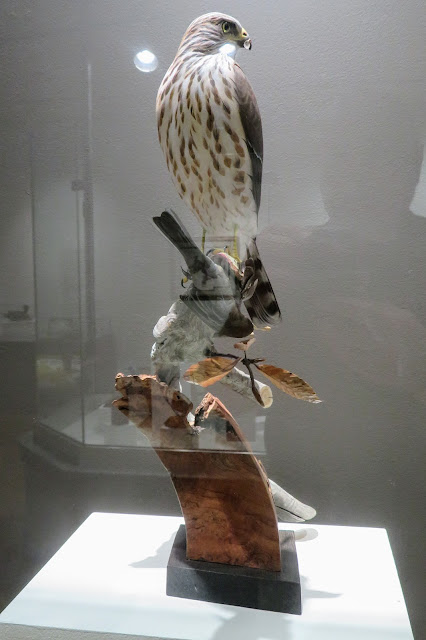 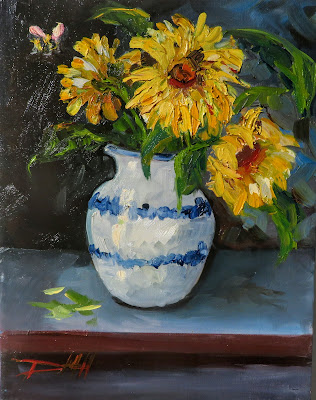 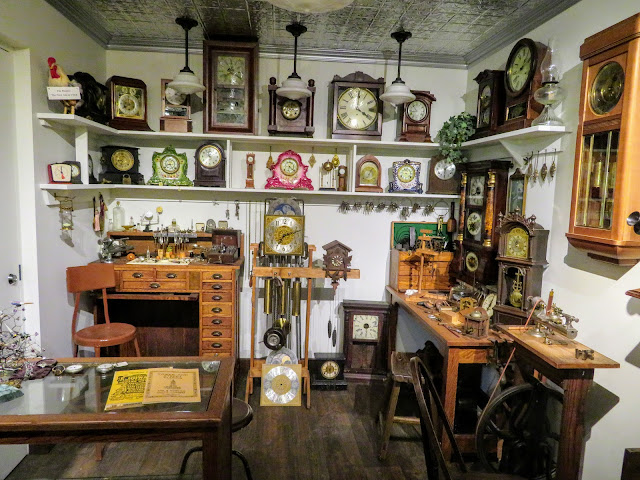 I just took a few photos of the exhibits on display in the museum.  We were more interested in the old buildings in the historic farm-lane adjacent to the new museum.  There was a large exhibit of bird sculptures and duck carvings and I thought that this carved sharp shinned hawk with a sparrow in its talons was one of the best.  Another room was full of paintings from area artists and this clockmaker’s shop was just a sampling of the clock collection out for public viewing.  Displays on local history, an insect exhibit, a section on ‘Jackson in the Roaring 20’s are samples of other offerings for public viewing.  The museum also features a planetarium!

While we were visiting the museum, we spoke to a gentleman who told us that an art class given by the Jackson Civic Art Association was underway in a nearby meeting room.  I told him that both my mother and my stepfather had been among the founders of that group back in 1947. 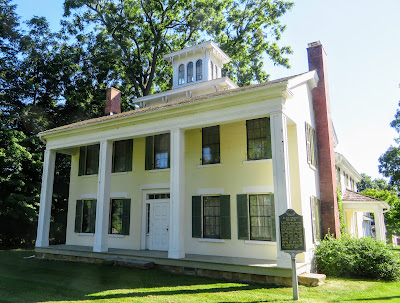 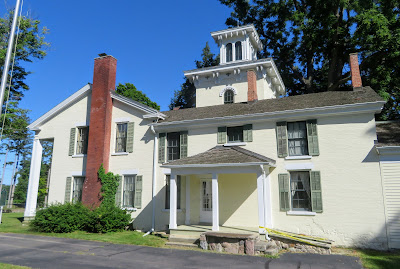 This is the Ella Sharp House aka the Merriman-Sharp House at the Museum which itself is located in the Ella Sharp Park on 4th Street in Jackson.  The original house was likely built in the early 1840’s but after Ella’s parents, Mary and Dwight Merriman took over the 500 acre farm, and it wasn’t long before they expanded the home by adding a Greek revival front section to it.  They expanded the home again in 1862, adding another addition as well as that Italianate tower. 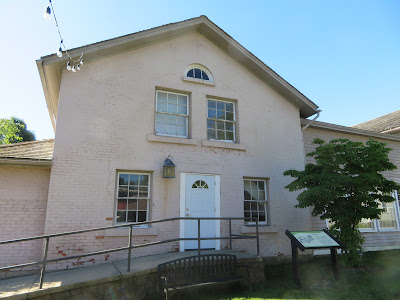 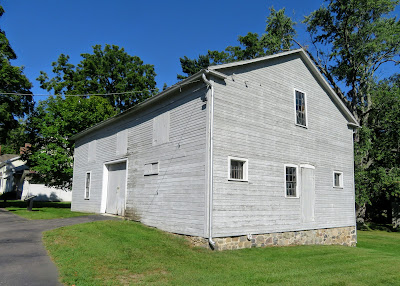 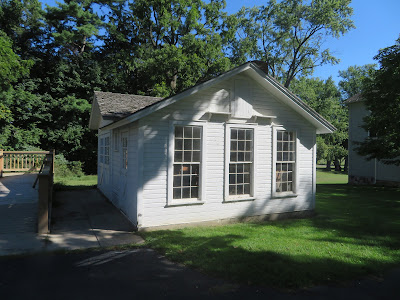 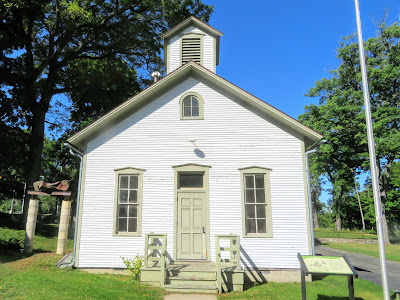 When Laurie and I attempted to exit the museum to visit the farm lane exhibits, the door leading out to them was locked.  We soon learned that none of the historic buildings were open to explore and that the gift shop in the museum itself hadn’t been open for months.  The problem is and has been a lack of volunteers… Many former volunteers just stopped coming to help after the advent of Covid-19.  So Laurie and just walked up and down the lane and took a few photos before departing.  It is a sad situation…

The first of the buildings shown above is the granary.  At one point it was converted to a restaurant and Laurie remembers it as the building where she and my mother worked to identify quilts and weavings.  The second structure is the tower barn…sans any tower.  The barn itself was built in the 1840s and was eventually converted to the carriage house.  The third building is an example of a typical woodworking shop from the 1800s.  The last building pictured is Dibble Schoolhouse.  It was built in 1885 for $650.  I didn’t take photos of the remaining buildings around the museum.

Note: I’ll end this post with a bit of local history.  At one point, beginning in 1929, Ella Sharp Park actually featured a zoo.  It included 4 bears including a Kodiak bear, buffalo, a coyote, monkeys, porcupines, woodchucks, raccoons, goats, a bobcat, an eagle, great horned owls, a red tailed hawk and a pair of lions.  A lack of public interest and funding eventually caused the zoo to be abandoned.  In 1954 the lone elephant was sold and the last bear died from a stroke.

The abandoned poured concrete enclosures, especially the lion’s den and Monkey Island, were a source of wonder and served as a somewhat risky playground for kids like myself.  What a place to play cowboys and Indians or just to climb around!  Due to the risk involved, it wasn’t too many years and these last vestiges of the zoo had been leveled.

Sorry for the long and wordy close for this post… Just click on any of the photos to enlarge them.