My Hometown – History and More (1)

After about 12 years, Laurie and I made our way back to my hometown, Jackson Michigan.  While I wasn’t born here, I lived here when I was a baby up through the 3rd grade…returning in the 4th grade and then through the 9th grade.  After that I was off to DeVeaux School, an Episcopalian boarding and day student school located in Niagara Falls New York.  I returned home for the holidays and summers through my senior year before heading up the road to East Lansing Michigan and Michigan State University.  Right off hand, I can recall 9 different homes where my family lived in Jackson.

While in the area, Laurie and I spent quite a bit of time exploring Jackson and other nearby locations that had some significance in my life or which have some historical significance.  We decided to start in the downtown area. 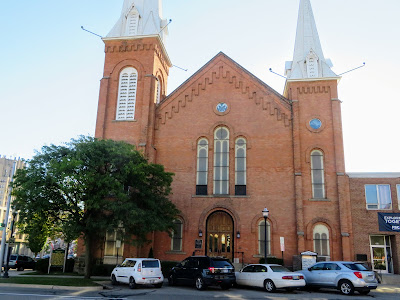 The First Baptist Church has had a presence in Jackson for over 180 years.  The church members gathered in a variety of locations for 35 years, but in 1869 construction began on this Romanesque Revival-style building.  A lack of funds delayed completion until a member of the building committee agreed to erect the walls for free if the materials needed could be supplied.  A donation in 1871 by 4 members of the congregation insured that the church would be completed.  It was dedicated in March of 1872. 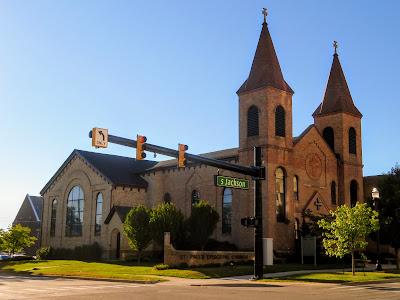 St. Paul’s Episcopal Church was my family’s church in Jackson.  My stepfather was active in the church and his memorial services were held here.  It was the Reverend Canon Frederick W. Brownell who helped my mother gain my admission to DeVeaux School where I was prepared for college.  Without Reverend Brownell’s assistance, my mother wouldn’t have been able to afford this educational opportunity.

My Dad, S/Sgt. Ronald Allen Myers, with 7 others who gave their lives for their country, is memorialized in one of the St. Paul's stained glass windows.

In 1839 Reverend Charles Fox arrived in the fledgling town that was emerging from a wilderness swamp.  He first organized the Episcopal Church in Jackson.  Located at 309 South Jackson Street, St. Paul’s is one of the oldest Episcopalian parishes in the state.  A 100 seat wooden church was consecrated at this location in October of 1840.

The cornerstone for this new $6,100 Romanesque Revival church was laid in August of 1850 and the church was consecrated in January of 1853.  The church is listed on Michigan’s State Register of Historic places.  For many years, beginning in 1958, the church’s Women’s Club conducted a town hall series as a church fundraiser.  Speakers included First Lady Eleanor Roosevelt, author Erma Bombeck and actor Vincent Price.  This series was a major social event until it ended in 1980. 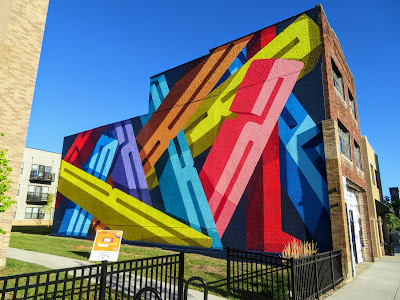 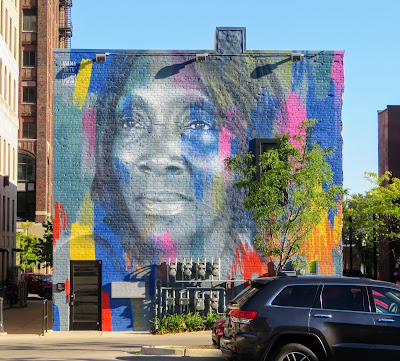 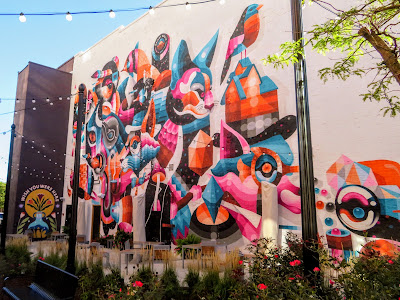 As we initiated our exploration of downtown Jackson, we discovered that the city was about to initiate a weekend of artistic expression and celebration.  This was the fourth iteration of “Bright Walls”, a public art and mural festival founded and run by volunteer members of the Jackson Young Professionals. 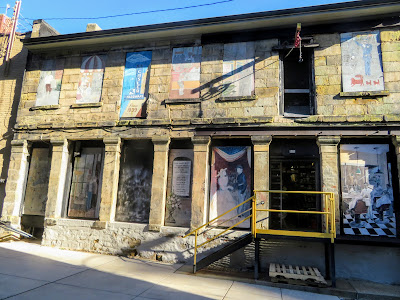 As usual I’d pulled together a list of historic places to find, photograph and write about.  This is the oldest building in Jackson.  The Stone Post Office, also known as the Blackwell Building is located at the rear of a business near the center of town.  It was listed on the National Register of Historic Places in 1972.

The first post office in Jackson was located in the log home of the village’s first postmaster.  But, in 1839, Joseph G.R. Blackwell, a wealthy businessman, constructed this stone structure to house his general store, which at that time faced the town’s small public square.  Subsequently, the building was used as the city’s post office…and it continued to serve as such until 1894.  Other buildings were built around this structure and since then, it has mostly been used as a warehouse for a series of businesses. 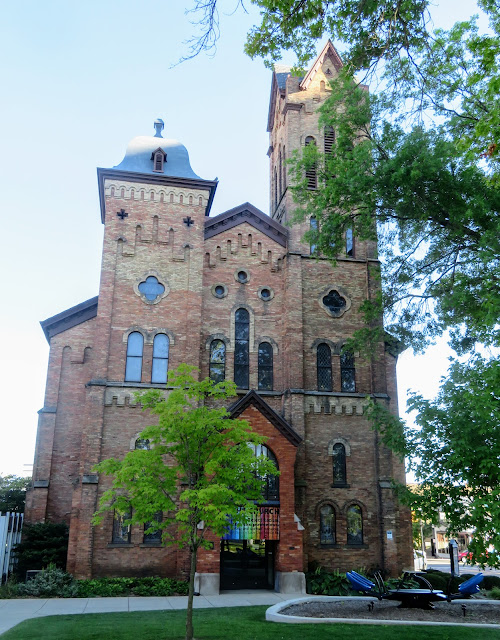 The First Congregational Church is another historic church in downtown Jackson.  Currently, this church is home to the First Congregational Church, United Church of Christ of Jackson.  Originally, Congregationalists and Presbyterians formed unified churches on the western frontier.  After a series of splits and other church structures, in 1858 the church members bought 2 lots where they would build their new church.  It was dedicated in 1860.  However the congregation continued to grow and by 1871, it was evident that they needed a meeting hall and Sunday school rooms.  So the entire building was raised by 8 feet and a lower section was built underneath the original structure.  Then in 1895, a new entryway was added to the building. 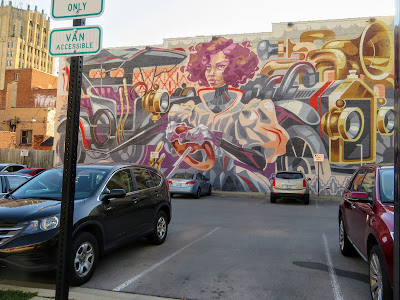 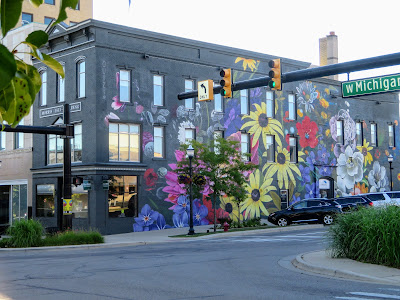 The Bright Walls Festival featured local artists as well as artists from across the globe.  Over 70 murals have been created in downtown Jackson.  This community project speaks well for the city.  In addition to the artists and musicians, sponsors, building owners, other community organizations and of course, volunteers.  More information on that building in the second photo will follow... 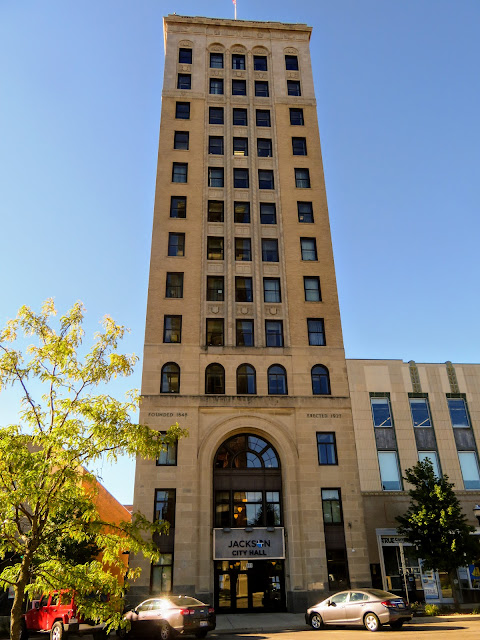 This is Jackson’s City Hall at 161 West Michigan Avenue.  This 183 foot tall building was built in 1927 to house both the Jackson City Bank and some offices for the city.  Today, it’s fully occupied by city employees.  In 2005, the city invested $10 million to renovate the building.

Note: There are 3 buildings in Jackson that are taller than the City Hall.  Two of the others are also historic but I didn’t take picture of them.  The tallest building in town is the County Tower Building at 230 feet high.

A little history… Founded in 1829, Jackson was named after President Andrew Jackson.  The town was first called Jacksonopolis and then Jacksonburgh.  At the beginning of the 1900s, it became an early automotive manufacturing center that attracted southerners and immigrants to the city’s many factories.  The current name was officially changed to Jackson in 1838. 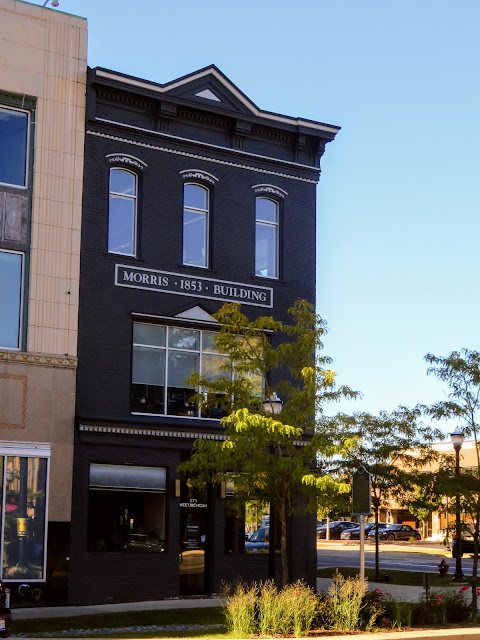 Remember the building with the flowers on one side that I'd mentioned above? It is the Morris building, also known as the Ismon building as well as the Carter-Sherman building.  This structure was built at the corner of Michigan Avenue and Jackson Street way back in 1853.  During the Civil War a Union Army lawyer practiced law here and he enlisted men from around the county for military service.  Mr. Ismon was a founding member of the Jackson County Bank in 1872.  Over the years, the building has been home to a dry goods store, a barber shop, a men’s haberdashery, a barber shop, then a shoe store and a jewelers. 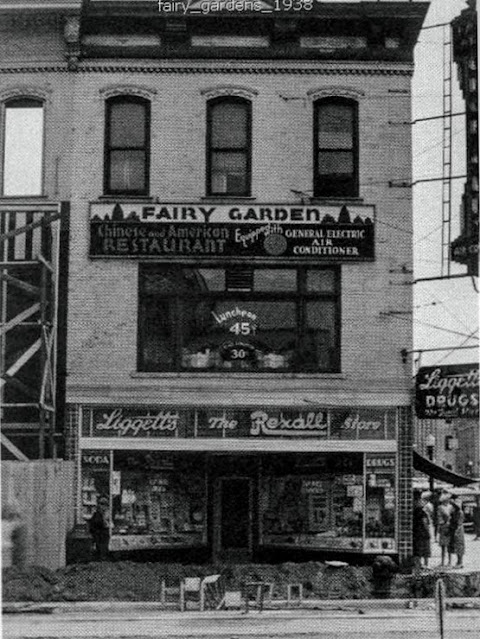 The photo from 1938 as shown above is more or less how I remembered the Morris building  from the early 1950s into the 1960s.  The on-going construction shown in the photo was for the new Woolworth Store going in next door.  The ground floor of the Morris building housed a Rexall Drug Store with the second and third floors serving as the home…at the time…as Jackson’s only Asian restaurant.  I must admit that we never ate at the Fairy Garden Restaurant…as our Sunday favorite was the now long gone Regent Cafe.  Fairy Garden was popular though.  Ralph and Fong Hoy Lew, his wife, operated this restaurant until 1950 when their son William took it over.  William Lum and his family ran the restaurant until 1973. 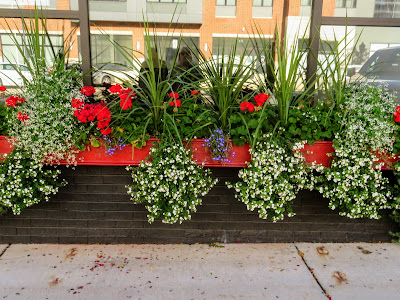 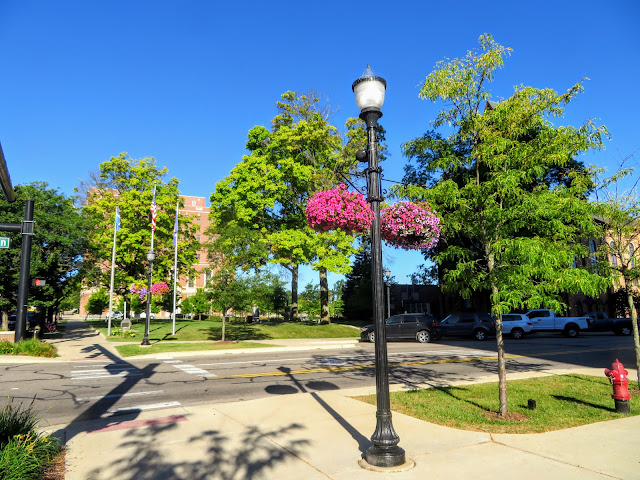 Downtown Jackson looked pretty darn good during our visit...lots of flowers and greenery!  I did note that the massive former Consumers Power Building with its appliance sales store had been demolished and the downtown park area expanded.  My stepfather was a salesman there.

A portion of this park has been recognized for its connections to the Underground Railroad.  Bucky Harris Park was added to the National Park Service’s National Underground Railroad Network to Freedom.  Michigan’s first anti-slavery newspaper, The American Freeman, and 3 other anti-slavery newspapers were all founded in commercial buildings around this center of the city.

Note: I was puzzled… Who the heck was Bucky Harris?  It took some digging but it turns out that he was a local businessman.  Charles “Bucky” Harris owned the Harris Building next to the park.  That building is now called the Blake Building and it is the 2nd tallest building in Jackson at 198 feet in height. 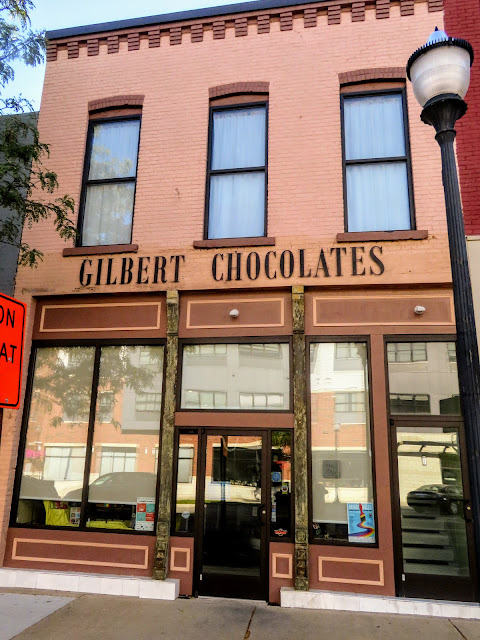 I decided to end this post with something sweet.  John O. Gilbert and his wife Mary had operated a bakery and confectionary factory in Findlay Ohio, starting in 1893.  They outgrew their city and their building and they decided to move to the much larger city of Jackson Michigan.  They opened 2 retail stores in Jackson and the reputation of Gilbert Chocolates grew to the point where they had to build a large two-story factory in 1913.  John continued operations until about 1960 and then the company was sold and operated by two successive owners.

The good news is that 2 stores are again operating in Jackson.  Even more importantly, the business has maintained its reputation as offering the finest gourmet chocolates in Michigan.  The store and factory shown above opened in 2016 and it’s located in downtown Jackson at 233 North Jackson Street…not far from the location of the original stores and factory.  Gilbert’s Chocolates can be purchased.  See: https://www.gilbertchocolates.com/.