Yes…we were impatiently waiting for this day!  I’d been following the progress and looking for the opening for months.  We’d been gone most of August and I finally got around to check if this local project/business had opened yet… 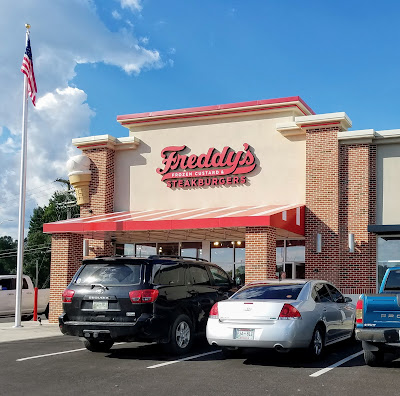 This is it!  Freddy’s Frozen Custard and Steakburgers finally opened in Oak Ridge.  Despite the 42 mile drive (one-way), we ‘had to’ make the drive for dinner this past week.

Yes…this is a fast food restaurant and I don’t usually eat at or talk about fast food chains.  From time to time we do frequent Firehouse Subs, Lenny’s Subs or Kentucky Fried Chicken, but Freddy’s alone is ‘blog worthy’! 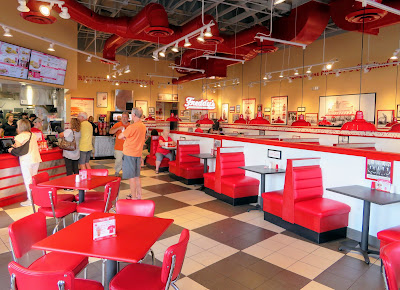 This is the dining area at Freddy’s in Oak Ridge.  It’s pretty basic with tables and booths but with its red and white theme, it is a cheerful venue. 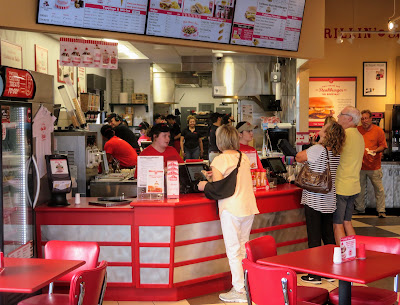 Customers place their orders and pay at the counter.  The cashier gives you a number and they call you up when your food is ready to be picked up.

Now onto the food… 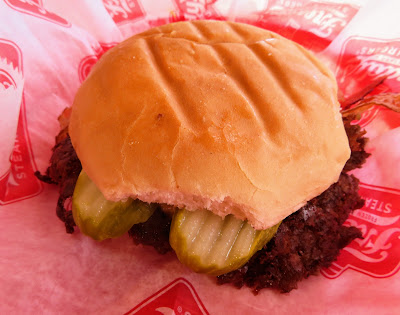 This is a Freddy’s Bacon and Cheese Double Steakburger. ($6.19)  It’s cooked on a flat top grill and it’s flattened like Steak N Shake’s burgers but Freddy’s version is crispy around the edges, it’s bigger, juicier and they just have more flavor.  The pickles are thick lengthwise slices…adding to the difference.

This was one of my 2 Double Steakburgers… That’s how much I like them! 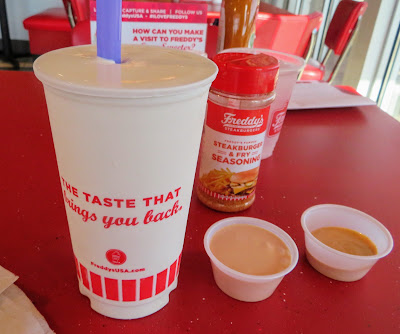 Laurie ordered a large vanilla Frozen Custard shake to accompany her meal.  It was thick and very good.  Shakes come with an extra-large straw…necessary due to the thick creamy shake. (Large Malts and Shakes are $4.59 ala carte) Note the sauces and branded seasoning. 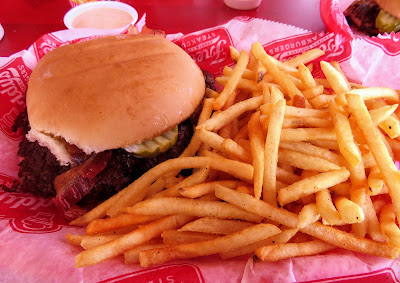 This was Laurie’s combo meal…A Bacon and Cheese Double Steakburger with Freddy’s terrific French Fries. (We shared the french fries!)  With the Shake, our cost was $11.39.

Laurie was raised on Steak N Shake burgers and fries.  She likes Steak N Shake enough that she chose it as the place for our anniversary dinner a couple of years ago!

Headline!  As per my better half, and with my complete concurrence, Freddy’s Frozen Custard and Steakburgers is significantly better than Steak N Shake…and/or Culver’s for that matter.  It’s no contest!

Note: Freddy’s in Oak Ridge offers a 15% discount to the military on Mondays and to seniors on Tuesday…the day we dined there! ($4.31 saved) 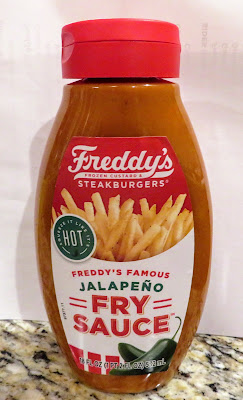 Freddy’s also markets their own French fry dipping sauce.  There are 2 versions…the original and this spicy jalapeno version.  We bought this bottle to take home for use with sandwiches. ($4.99) While I preferred it with my sandwich, I still would rather have ketchup with my fries. (Ketchup is available for customers)

There are about 2 pages of frozen custard options on the menu including 31 mix-ins and toppings.  A veggie ‘burger’ is available as are hot dogs, chicken tenders, chili, cheese curds and chicken sandwiches.

Other Freddy’s locations in East Tennessee are in Bristol, Johnson City, Kingsport and Morristown.  I was told that others were planned for the Knoxville area on Chapman Highway and in Alcoa…all too darn far from our home.  We need a Freddy’s on the west side of Knoxville or in Farragut.   Lenoir City would even be better!

The Freddy’s Frozen Custard and Steakburger store in Oak Ridge Tennessee is located at 349 South Illinois Avenue.  Phone: 865-272-5177.  There is a drive-up window for those on the go.  The company’s website is at www.FreddysUSA.com.  The company now has over 300 locations in 30 states.

Take Care, Big Daddy Dave
Posted by David at 7:00 AM