This post is focused on personal history and on a rather narrow audience…those who ever attended DeVeaux School, a college preparatory school that was located in Niagara Falls New York near the whirlpool in the Niagara River. 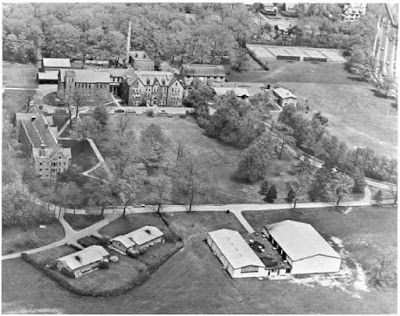 This is an old aerial photo of the DeVeaux School Campus.  As you can see, the 51 acre site included a significant number of buildings from different eras in the school’s history. 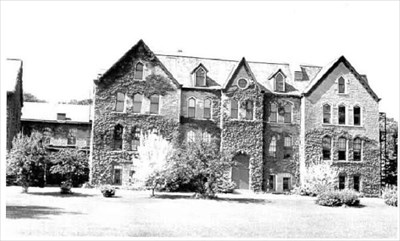 This is Van Rensselaer Hall.  Dedicated in 1857, this was the first structure on campus.  During my time at DeVeaux, it included the kitchen/dining hall, infirmary, offices and classrooms.

The property was deeded by Judge Samuel DeVeaux in the mid-1850s as the DeVeaux College for Orphans and Destitute Children.  Until the school’s closing in 1971, it was operated by the Episcopal Diocese of Western New York.  I was part of the graduating class of 27 boys in 1961. 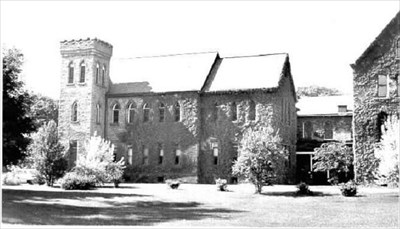 In 1866, Van Rensselaer Hall was expanded and it was later named Patterson Hall after the second president of the school.  In 1894, the building shown above was added.  This Gothic style building was attached to Patterson Hall and it featured a new enlarged chapel (Ambrose Chapel) that occupied the entire second floor.  Our study hall was on the first floor.  During my time at DeVeaux, the bells rang every 15 minutes during the daytime and early evening, sounding out each hour through the day.
Judge Samuel DeVeaux was a major investor in the Lockport and Niagara Railroads and he was also heavily involved in the construction of the Whirlpool Suspension Bridge in 1847.  The region still bears his name today. 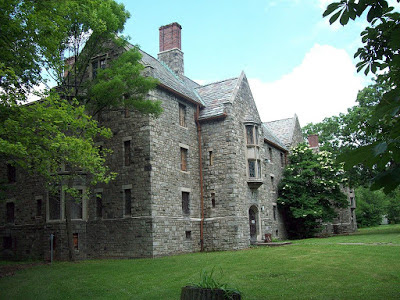 For almost 80 years, students received mandatory military training with the students/cadets dressed in uniforms.  That ended in 1950 when the uniforms were replaced by coats and ties.

During the twentieth century, the demand for prep-school education declined.  When the Episcopal Diocese ceased operations here in 1971, they searched for another organization to take over the property and the care of the historic buildings.  Over the years the property has been owned or leased by Niagara County, the City of Niagara Falls, Niagara University, the Board of Cooperative Educational Services and Niagara County Community College.  The current owner is the New York State Office of Parks, Recreation and Historic Preservation.  The property is now called DeVeaux Woods State Park.

So much for preservation!  Van Rensselaer, Patterson and Monro Halls were all torn down ca. 1994.  Fortunately Laurie and I visited the closed campus in 1980 so I had one last look at those historic structures. 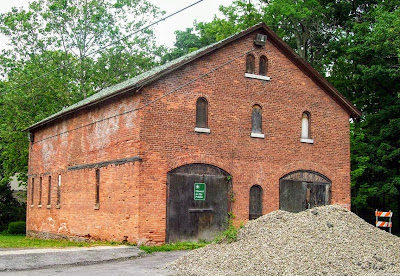 The 1994 demolition of the main school buildings left this handsome brick carriage house as the oldest structure remaining on the property.  It was built in 1863 and it is rumored that it may have served as part of the ‘underground railway’ for runaway slaves.  Pressure from preservationists forced the state to cover the roof with a plastic covering to prevent further deterioration and to enable eventual restoration. 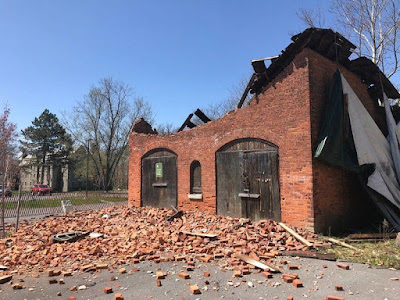 As this subsequent photo shows, preservationists and the government didn’t get the job done in time to save the building.  Mother Nature took over in May of 2018 and damaged the structure beyond repair.

…and anther one bites the dust! 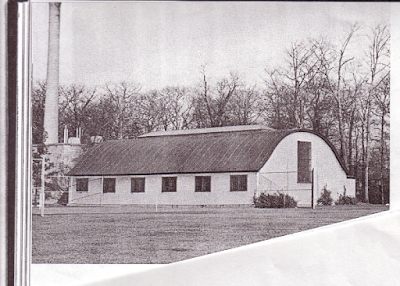 This is a photo of the old gym at DeVeaux School.  It looks like something out of the 1920s or so.  When I attended school here it was used for special events such as a rare co-ed dance.  We had a nice new gym for our indoor sports that featured an Olympic size swimming pool and other facilities. 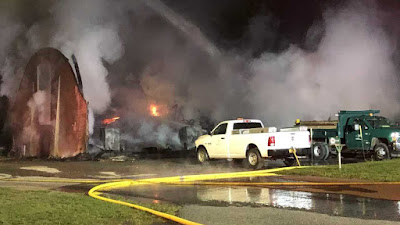 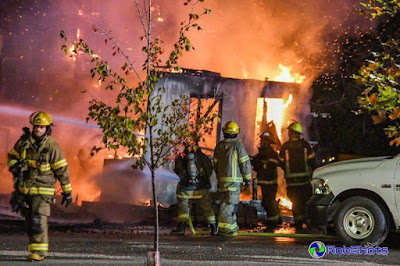 A fire overnight on September 5, 2019 brought down the old gym, one of the 2 remaining older structures remaining on the former DeVeaux School campus.

At this point in time the old gym or auditorium was being used as a maintenance shed.  Going, going, gone… If you look back at the photo of the destroyed carriage house, you’ll see Schoellkopf Hall, built in 1929 and the only relatively old building remaining on what was our campus. 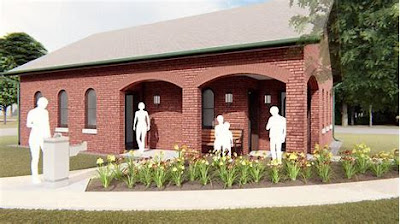 Classmates and DeVeaux graduates… I’m sorry to report that his “comfort station” is being or has been built ‘in the style’ of the carriage house to replace that last truly historic building at our school.  The campus that we knew as students is almost totally wiped out.  Somehow, given the lack of caring/preservation, this 'commemorative' structure seems fitting.

Thanks to Gary Scott, Class of 1961, for alerting me to the story about the fire.  It motivated me to create one last post about this institution that was so important in our formative years and which established the foundation for the remainder of our lives.  Given the sad fate of our former school, it’s a good thing that we have our memories.

After my first post about DeVeaux and with the advantage of the Internet, many in our class managed to find each other, holding our fifty-fourth and fifty-sixth year class reunion.  The fifty-eighth reunion was planned this year but it was cancelled due to some health issues.  The good news is that a few of classmates are still planning to get together.

Take Care, Big Daddy Dave
Posted by David at 6:02 AM